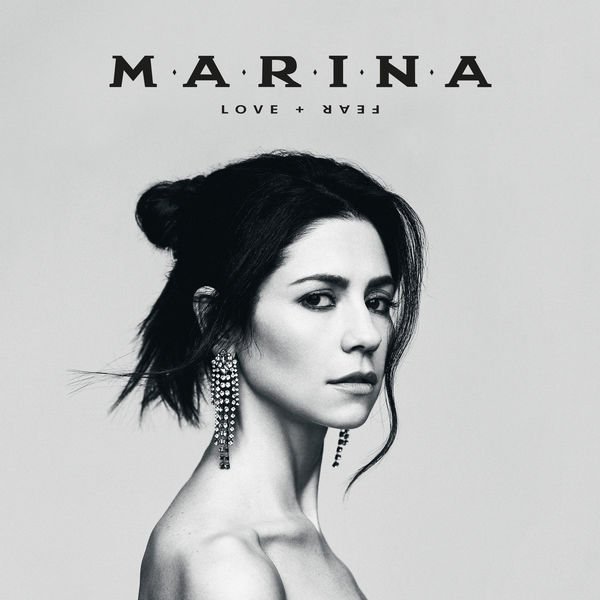 The psychiatrist and grief expert Elisabeth Kübler-Ross argued that there are two primary emotions: fear and love. She wrote that if you are in a place of fear, you cannot be in a place of love – and vice versa. But for Marina Diamantis, formerly known as Marina and the Diamonds and now mononymously as Marina, there is plenty of overlap.

Diamantis has never shied away from a concept. Electra Heart was a multiple personality big pop breakup album, while her last album as Marina and the Diamonds, 2015’s Froot, explored a tropical bubblegum world of her own creation. Love + Fear goes further, at least conceptually, by literally splitting the album into two parts. On the first portion, Love, she’s nostalgic for home, in reverence to romantic love, jealous of spiders for having their place in the universe all figured out and repeating self-help mantras to convince herself that she’s ok over Latin beats and sparse, synthy undertows. There’s love but also anxiety. On Fear, she embraces insecurities, trying to understand the weirdness of life – but fear, for all its question marks, still seeks love.

Love is a pleasant although occasionally overly earnest capsule collection of pop sounds where Diamantis proves herself to be the master of the “brief pause... and gentle drop” technique. A collaboration with Clean Bandit and “Despacito” mastermind Luis Fonsi feels a bit out of place with its beach-bar vibes but if it jars, it’s also forgotten almost as soon as it’s over.

Throughout both parts (but more so in Fear) there’s a detachment to Marina’s vocal that implies an alien being trying to figure humanity out. Her voice skitters across songs with a frostiness reminiscent of Madonna’s Ray of Light era, and sometimes it feels like a lecture being delivered into the mirror: everyone’s just like you, no one’s happy, enjoy your life. There’s something robotic in the questions she asks – on the politically tinged “To Be Human”: “All the things that I've done and I've seen/ Still, I don't know what it means/ To be human” and on “Emotional Machine” where the protagonist has made a conscious decision not to feel at all.

“I need... to believe in love”, she sings on the first song of the Fear portion; this existential detachment is a result, partly, of the burning trash fire that is life in 2019 (Brexit! Trump! The imminent world-ending conclusion to climate change!) and also the crisis of faith she battled between her last album and now. Dropping “and the Diamonds” from her name was part of a reassessment of her whole career.

She ends Fear (and the lengthy album as a whole) with the gentle, ghostly piano ballad “Soft To Be Strong” which preaches kindness as strength. It’s a worthy message to close an album that probes metallic emotions and deep, universal insecurities. Recite it into the mirror every morning and maybe we’ll end up believing it too.